Why choose just one technology when you can apply two? If it’s quite realistic to utilize both Java and Node.js,…

Both Node.js and Java intend to modernize and unify the old-fashioned ways that developers follow in web development. Node.js offers a convenient runtime environment that is suitable for both frontend and backend development, and Java provides the opportunity to run the code on any platform or gadget. Which technology is better? Let’s find out in our article.

Node.js and Java are both widespread technologies among developers all over the world. Each of them has its own peculiar characteristics that make it unique. First and foremost, Node.js is a runtime environment, and Java is a language. Then, Node.js and Java have distinct areas of implementation and technical characteristics. Continue reading to dive deeper into these technologies. In our article, we will study the concepts of Java vs Node.js, their pros and cons, areas of implementation, and major differences between both technologies. 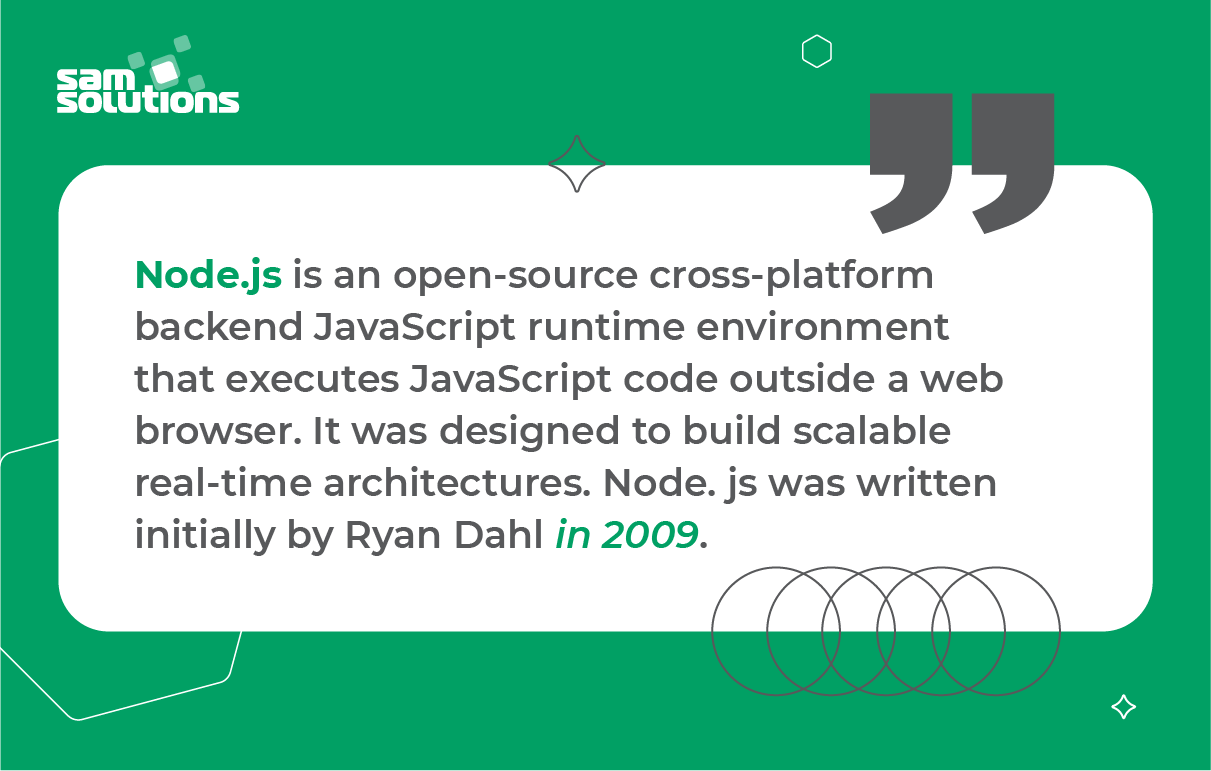 Node.js is an open-source backend multiplatform JavaScript runtime environment. The concept of “JavaScript Everywhere” implies that web app building is unified within just one language — JavaScript — for both client- and server-oriented scripting. Therefore, thanks to utilizing JavaScript this way it’s possible to resort to Node.js both for frontend and backend development.

The major functionality of Node.js is the no-browser code execution of JavaScript.

Node.js can carry out effective interactions with input/output devices via API, connecting to third-party libraries that use other programming languages.

With the help of Node.js, developers can create real-time applications, chat apps, scalable mobile apps, and carry out embedded programming. Thanks to its ability to compile JavaScript to native machine coding prior to execution, Node.js developers can attain outstanding performance during the run time period.

Node.js has the characteristic of asynchronicity, making it possible to deal with the requests independently of each other. Due to this feature, the JavaScript coding can be executed in an effective non-blocking manner.

Node.js is single-threaded, so it is possible to manage several simultaneous clients with just one thread. As it is capable of providing data output in chunks, developers have composable coding which is exceptionally fit for creating productive network apps that are easy to scale. Chat apps, Android-based apps and streaming apps with robust interactivity and dynamics can apply Node.js, while it is great at keeping clients updated instantaneously in real time.

Due to its simplicity and JavaScript-based nature, fast speed and cost-efficiency, Node.js has gained popularity for building large media services. Besides, it has won the hearts of developers thanks to its user-friendly JavaScript characteristics. Nevertheless, its usage is not limited to the abovementioned cases, JavaScript-based technology is pretty versatile and can be implemented, for example, in such sought-after fields as embedded systems, eCommerce and IoT. 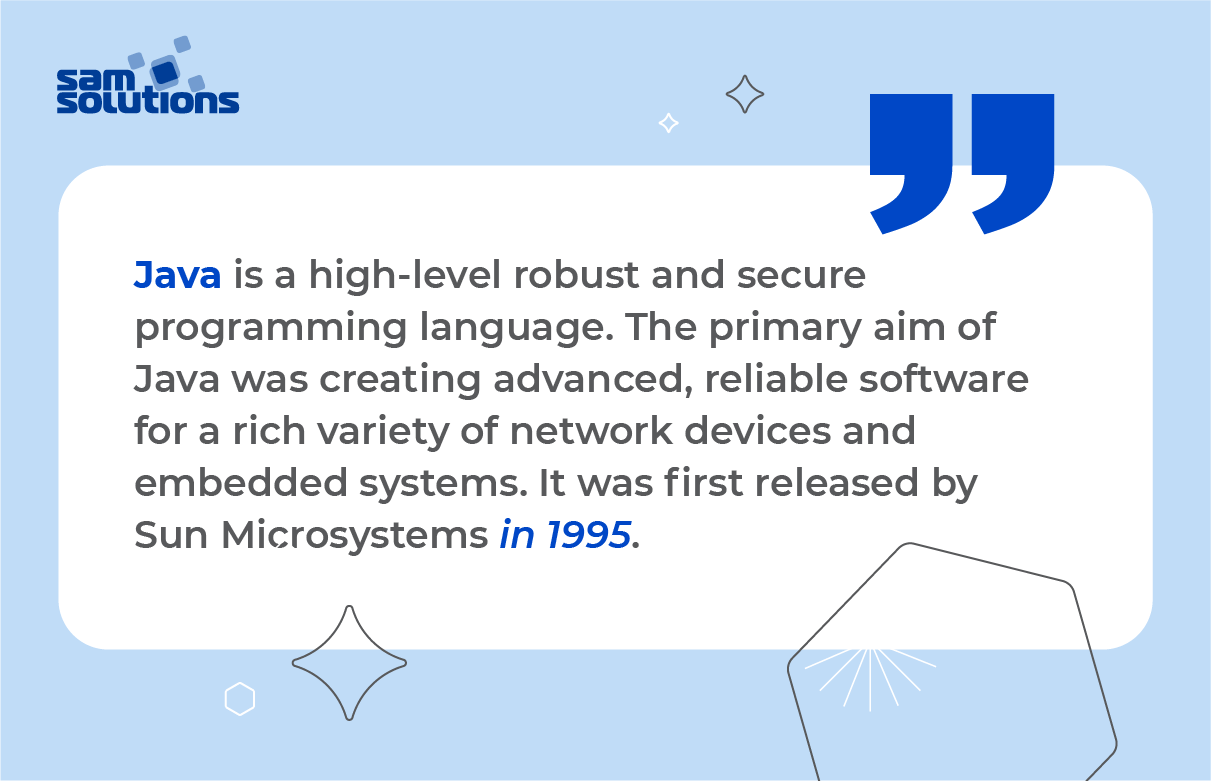 Java is a widespread platform-agnostic software programming language that has been on the market for more than 27 years already, and it doesn’t show any signs of giving up its position. It has been among the most well-known and popular programming languages for years already. It has witnessed substantial evolution, and now it powers up a large sector of modern IT sphere thanks to its high reliability, security and stability.

Currently, lots of groundbreaking programs are based on Java. Although the majority of Java-based apps today integrate both Java runtime and app, the performance of some apps and websites is still dependent on the presence of desktop Java. Java is widespread in the developer community due to its simplicity, user-friendliness, high security, and platform-agnostic nature.

Being extremely flexible and portable, Java can run on various kinds of operating systems and machines. When it was initially produced, it had an aim to serve as a tool to enhance TV with interactivity functionalities. It provides rich support for concurrent computing, networks, and GUIs. Today, Java has acquired a great number of loyal developers who utilize it in various spheres and domains.

There are plenty of Java libraries and frameworks that assist developers in their efforts. Supported by an active community of developers, the technology is constantly growing and acquiring new functionalities that serve to expand Java potential and make it even more powerful in new versions.

Pros and Cons of Node.js 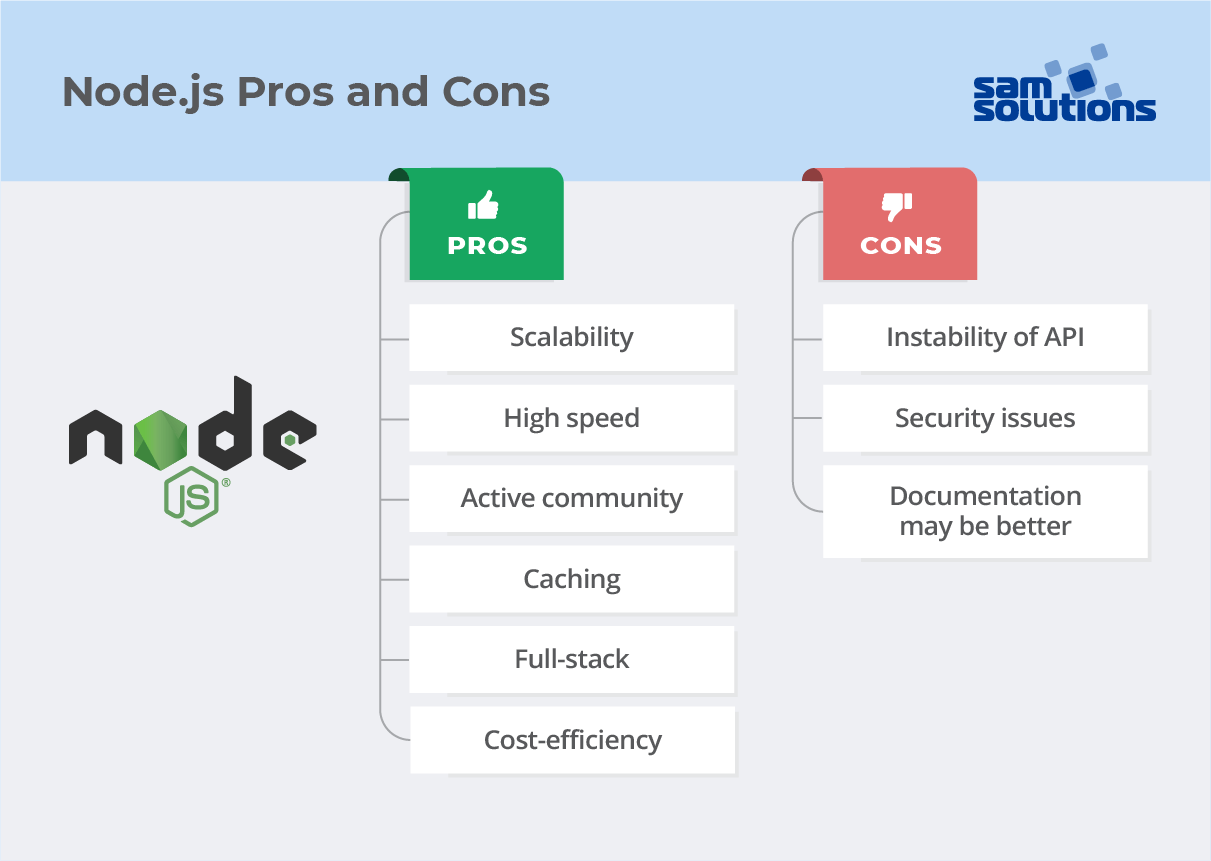 Node.js is an extremely scalable solution thanks to its asynchronicity, so it is great for dynamic apps that work in real time. This is one of the most significant advantages of Node.js. When your business grows, Node.js solutions can be scaled according to its updated needs. Active implementation of microservices facilitates scalability as well.

Thanks to the JavaScript-based nature of Node.js, developers often choose it because it is easy to learn and begin using from the start. Known as a high-performance technology that offers higher speed in comparison with other options, it attracts a lot of adherents. Node.js enjoys a vibrant community of users who are eager to help each other, provide guidance and inspiration, and share their creative ideas with the world.

With the opportunity of caching in Node.js, it becomes possible for developers to keep all the data on the local computers and use them almost instantaneously whenever needed, which is especially beneficial for websites with high traffic.

Node.js is renowned among developers for its cost-efficiency, as it utilizes just one language — JavaScript — for both server side and client side uses. Due to this flexibility of Node.js, it is possible to carry out full stack development without hiring additional developers, which significantly reduces costs. This characteristic also improves effective cooperation between developers and helps avoid misunderstandings on Node.js projects.

Another advantage of Node.js is quicker time-to-market, so that companies can provide their clients with their products and services faster, which is reflected in increased customer satisfaction. Node.js is a perfect tool for multi-platform development, so Node.js-based apps can function efficiently on almost any kind of operating system or gadget.

Among the drawbacks of Node.js, developers can name the following several characteristics. Many users complain about the slight instability of API in Node.js, which proves to be especially important while carrying out migration activities. Without powerful libraries in Node.js, developers often have to resort to third-party tools. Some novice developers would like to have more robust documentation, as they are not completely happy with what Node.js can offer in this regard.

Pros and Cons of Java 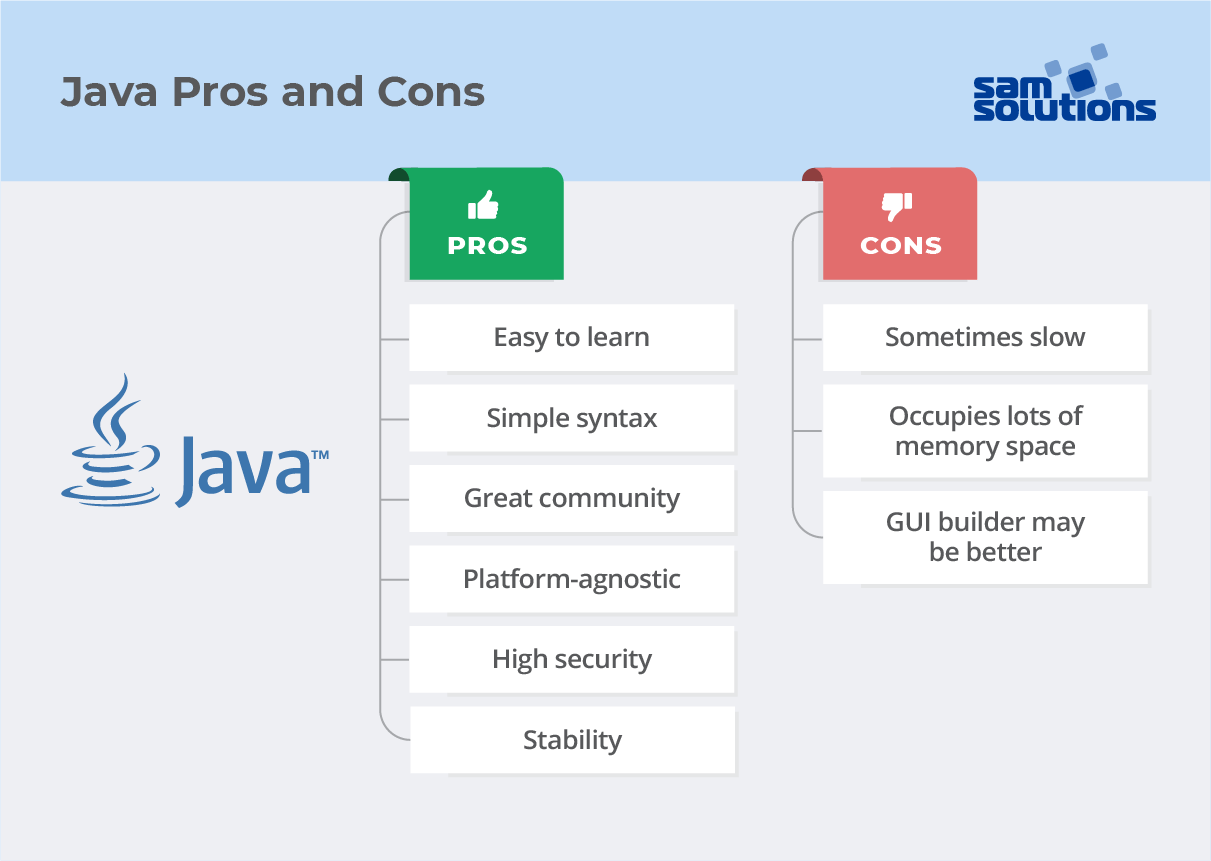 Java has proved to be a highly visible technology in the developer community across the entire globe. Lots of professionals choose to adhere to this language, as it brings precious benefits for developers. Let’s study the most prominent of them below.

First and foremost, Java is widely recognized for its user-friendliness and simplicity, which means that it is not difficult to grasp and master for developers. The syntactical characteristics of Java are often favorably distinguished to be considerably human-like. Then, it offers high security and assists in preventing cyberattackers from accessing data without proper authorization. Another perk of Java is cost-efficiency: it is not expensive to create Java apps and provide subsequent maintenance to them.

A significant characteristic of Java is its flexibility due to its platform-agnostic nature, which allows developers to use its coding everywhere. Java Virtual Machine can load, verify, and execute Java code, ensuring platform-independence, high security, and correct functioning.

Moreover, Java is an extremely portable instrument, which means that it enjoys high compatibility with a wide variety of gadgets. Another prominent advantage of Java is the possibility to debug the app remotely. With Java enterprise stack, engineers can use the most advanced servers on the globe, which make telemetric activities more efficient.

Active support of the user community ensures that developers have guidance and assistance from more seasoned colleagues when needed. Also, one more prominent advantage is the high stability of Java, as updates and improvements are often introduced to eliminate errors.

Now, no technology in the tech world is flawless, and that applies to Java — it also has a few drawbacks one should consider prior to using it. Java specialists implement sophisticated libraries for data conversion into Java objects, which is an intricate and uneconomical procedure. In addition, Java occupies a lot of memory space, which influences overall performance inauspiciously.

Developers consider Java to be slow sometimes, as it consumes a lot of memory. Without proper back-up facilities, it concentrates on data storage, but it is obviously not enough. With complicated concurrency, Java offers abstractions instead of convenient threads. According to some developers, the graphical user interface builder is not great, and in this regard languages like Python may be better. Besides, the coding in Java is renowned for its complexity and verbosity.

Usually, it takes more time to code in Java. Nevertheless, the exact amount of time depends on the peculiarities of the project and number of Java developers working on it.

There can be no explicit answer as to whether Java or Node.js is better in general, but you can definitely choose one of them as the best option for your specific project. For example, fintech and trading spheres will reap the benefits of Java, and IoT-based projects can take advantage of Node.js.

In addition, when choosing the variant for you, pay attention to the technical specificity of the projects where the technology will be implemented. If you strive for high speed and scalability, then Node.js would be a great tool for you. With priorities such as stability and security, your best choice would be Java.

What popular applications are built with Node.js and Java?

Among the most well-known apps that are based on Java, you can find Minecraft, NASA World Wind, Spotify and Netflix. Famous implementations of Node.js include Twitter, LinkedIn, Groupon, etc.

Both Java and Node.js are great tools. Each of them has its own peculiarities, and each of them is predicted to gain even more popularity in the years to come. At the moment, there are no evident signs that one of them would substitute the other. However, the future will show the exact outcome.

Is NodeJS more performant than Java?

It would not be unbiased to say so. Java isn’t less performant than Node.js. On the contrary, many specialists confirm that Java is more performant than JS, and, consequently, Node.js.

Is NodeJS more popular than Java?

It is not easy to tell with certainty, since their nature is not the same, Node.js being a JavaScript environment and Java a language. It would be fair to note that each of them has characteristics that make them great for specific areas. However, some developers would say that Node.js is more popular, due to its inherent lightness and speed.

Is it possible to use NodeJS with Java?

Sure, you can integrate Node.js and Java.