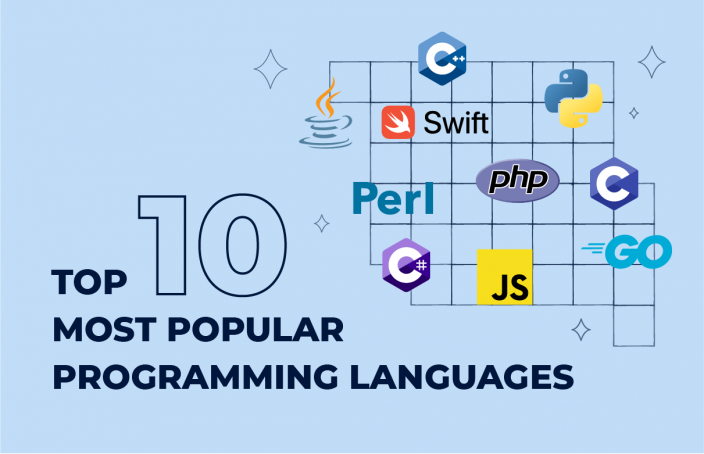 According to the US Department of Labor, employment rates of software developers, QA analysts, and testers are projected to increase by 22% from 2020 to 2030, which drastically exceeds all other professions. 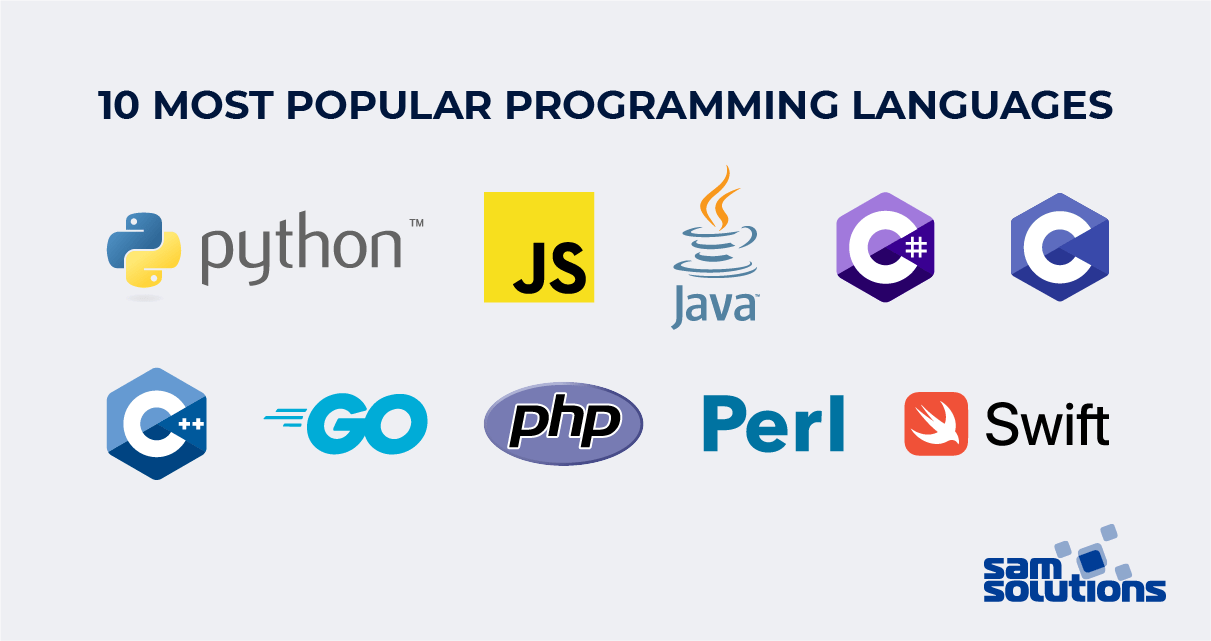 Python is a programming language that is often preferred for the creation of software programs, web development, automation of management jobs, data analytics, and graphical representation of information. It is comparatively easy to pick up, so it’s come into widespread use among non-tech specialists as well (people working in fields such as academia, finance and bookkeeping). With strong abilities in analytics, it has become essential in the field of data science, especially when it comes to ML, statistics, 3-D tools and complicated estimations.

Other areas of implementation include backend and full stack development, data reprocessing and improvement of cybersecurity features. In addition, Python can be used to automate repetitive tasks and carry out tests.

It offers good compatibility with other programming languages, fantastic syntactical characteristics, and a great user experience with a high level of interaction. Software engineers use JS to create high-quality websites, mobile applications, computer games, as well as programs for spheres such as VR, AI and ML.

Java is a versatile practical programming language that has kept a leading position among other popular languages for several years in a row. It is suitable for a variety of purposes: you can use it to build an eCommerce webstore, mobile app, or fintech and gaming applications. It is appreciated for its simplicity in terms of writing, compiling, debugging, and learning.

Java is comparatively easy to read as the language is similar to the natural language we use in our everyday life. Other features include the ability to reuse the code, increased safety, cost efficiency and platform-independent nature.

C# is a popular programming language most suitable for developers with higher-than-intermediate coding skills. It is widely used for building desktop and web apps, web services, cloud programs, as well as for creating computer games. Created by Microsoft, it is frequently implemented in Windows infrastructures.

With C# it is possible to create dynamic websites that are easy to use, scale and maintain. Thanks to its advantages such as time efficiency, good memory backup and expressive syntactical features, it is often preferred over other options.

The main advantages of C are its portability across a variety of platforms, cost-friendliness, easy debugging process, fast compilation and dynamic memory allocation. In addition, C offers faster app execution in comparison with many other popular languages and provides plenty of advantageous inbuilt features.

C++ is best for performance-oriented apps that are focused on swiftness and effective memory storage. It’s used for building GUIs, programs for enterprises, games, robots, artificial intelligence, and in scientific research.

General distinctive features of C++ are high scalability, large user community, and portability, allowing the movement of programs across a variety of platforms. Being a compiler language, it enjoys the reputation of being fast-paced. With syntax much like other languages of the C family and Java, it’s easier to grasp if you are already familiar with one of them.

Go is a simple and reliable programming language that’s frequently used for the creation of lightweight microservices, cloud apps, or programs that run on servers. Other uses of Go are in automated site reliability engineering, DevOps, AI and data analytics. It is easy to learn thanks to its minimalistic and transparent features. Other significant benefits include high performance, speediness, scalability, and comprehensive programming tools.

PHP is an open-source multi-purpose utilitarian language used to create web apps. With rich extendable features and a supportive user community, it has established itself as a top pick for both novice and seasoned programmers. Thanks to high resourcefulness, its code can be readjusted with no additional costs.

Being a cost-efficient language that is easy to learn, optimize and integrate, PHP remains among the most preferred backend languages. It is not difficult to use thanks to its logical and consistent syntactical structure. Other essential characteristics of PHP include high performance, extreme flexibility and feasibility, as well as compliance with various OS types.

Known for its adjustability, constant improvement in its proficiency in processing word-oriented materials, and efficient problem-solving, this programming language is extensively used both for business and personal purposes. Initially, it was brought into existence with the aim to scan, extract and print text-based data, along with handling other administrative chores. Today, it is used for textual data redesign, completion of organizational tasks, analytics and batch processing.

Perl is quite remarkable in that it uses familiar words that people regularly implement in everyday speech. Moreover, being open-source, it’s free to use. Interestingly, with its large community of faithful devotees who are passionately fond of this programming language, it has inspired multiple engineering championships. Perl is so well-loved that poems have been written in it!

Swift is a robust programming language that lets developers efficiently create applications for Apple products. Thanks to its grammatical laconism combined with syntactical expressivity and conciseness, software developers love this language. With the capacity for full stack development, Swift remains among the most popular development languages and still has a great community of adherents. Furthermore, it is well-known for its safety and, as its name suggests, high pace.

As a performance-oriented language, it focuses on simplicity and safety. Because it safeguards configurations, it protects code from possible inaccuracies. Besides, the functionality of it is greatly extendable to provide scalability to the projects.

Other Programming Languages of Note: 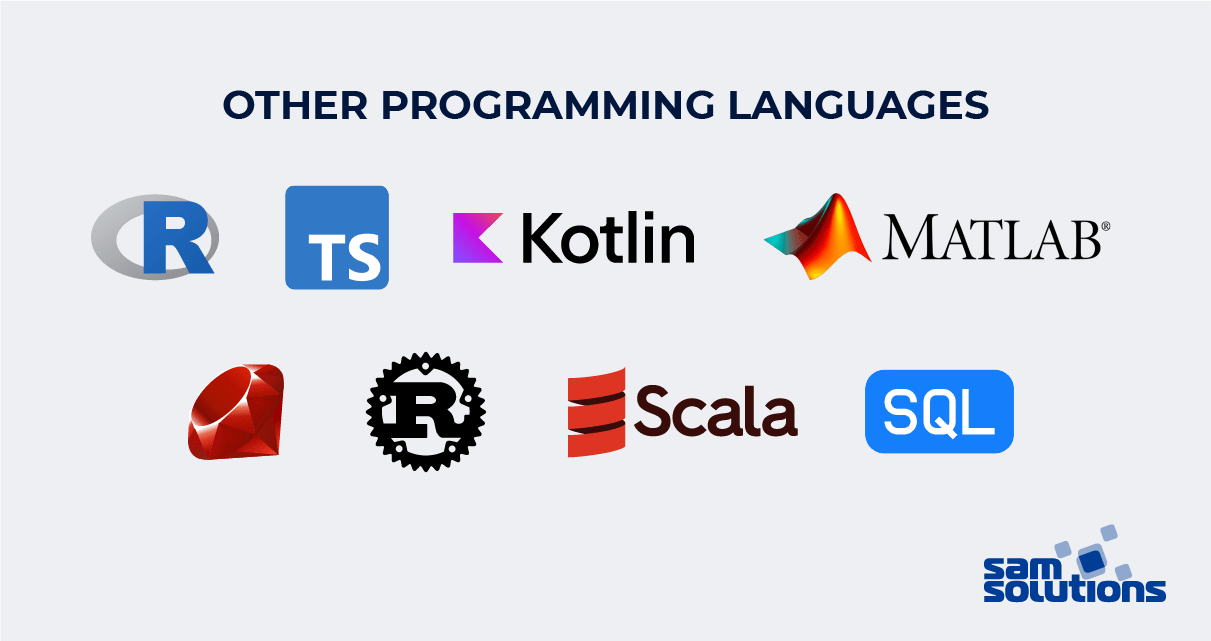 In most cases, the R programming language is used for statistics and consequent graphical representation of data that you can view, inspect and base critical decisions on. It has easily accessible code due to its open-source nature, so it’s possible to eliminate bugs in a quick and transparent way, and anyone can introduce changes to the code.

You don’t need any third-party library to convey data analysis — it is built into the programming language. One of the most prominent characteristics of R is that it’s focused primarily on working with data, so it’s widely implemented in academia and scientific research. In addition, it can also be implemented in fintech, commerce and business.

As a superset of JS, TypeScript was originally created to identify any mistakes at early stages of development in order to increase the efficacy of JS software programming. The TypeScript programming language has plenty of advantages. It offers robust development instruments for JS IDEs and enhances coding processes, with the ability to forestall distressing errors with code revision.

Another benefit is that it is more effortless for reading and understanding than many languages. Furthermore, it is less problematic to refactor and provides easily comprehensible, predictable code. It may be particularly useful when you possess huge codebases or need rapid development.

Kotlin is an interoperable, safe programming language with a clear structure. Thanks to its compatibility with Java, both languages can be implemented together in a project. Many developers report that they enjoy coding in Kotlin far more, as it is more transparent and more compact than Java. However, it is not the best choice for novice developers.

Although Kotlin is widely used for mobile Android development, its implementation extends far beyond that. It is very popular for backend web development and can be used with Spring framework and others. In addition, it is often used for full stack development, multiplatform mobile development, and even to visualize data in data analysis and processing.

The MATLAB programming language incorporates rich capabilities to compute, visualize and program in a user-friendly math-oriented environment. It offers an abundant library for statistical and algebraic math, calculations, and analytics, and is enriched with inbuilt graphical possibilities for data display and instruments for creating customized plots.

It is widely used to create models, simulations and prototypes, and develop algorithms, as well as in data visualization, investigation and research, developing apps and GUIs. Other areas of MATLAB implementation include industrial commercial usage, academic field, artificial intelligence, testing, finances, biosciences.

Ruby is a convenient multipurpose language with an easy-to-use syntactical structure, allowing users to concentrate on discovering the right solution rather than writing heavy and long lines of code. It can be used both for frontend and backend software engineering, and it opens up rich opportunities for creating desktop systems, web apps, data processing software, and automation instruments.

This language is also used to generate sites statically in situations when every page of the site can be built simultaneously. Moreover, with Ruby it is easy to launch the application, and even a small-sized company occasionally can resort to using Ruby when their software needs to be tested and deployed within the shortest possible time.

Rust resolves the difficulties that С++ software engineers have been struggling with forever. Thanks to its double-mode nature, it can be used in two ways. In the first case, when developers work in safe mode, there are certain limitations set on the development process, and as a consequence, the code will work properly.

In the second case, while not in safe mode, the engineer is at liberty to use additional options to enhance the work. Nevertheless, this mode requires extra care to forestall vulnerability factors. As a rule, this programming language is utilized to produce OS, elements for browsers, simulations, games and VR.

The Scala programming language was created with the purpose to be able to expand according to the user’s needs, so the software can be used to write anything from a tiny script to a gigantic system. It has been already implemented in a number of essential initiatives in various organizations. Software developers still use it to innovate and experiment.

It’s mostly used in distributed systems, website creation, data analysis and reprocessing. Scala provides great infrastructure support in lots of institutions of various kinds and is still used by companies such as LinkedIn, Tumblr and Airbnb. It is extremely functional and easy to scale, as its name implies.

SQL is used for communication with databases, particularly for updating, retrieving, manipulating and managing data. It’s widely implemented as an effective tool for backend programming application development in the music and financial industries, as well as in social networks.

The programming language has won a large community of keen admirers, so if you decide to learn it, you will surely find plenty of materials. Data scientists use SQL to extract and interpret data received from different resources. Other areas of application include building software applications, conveying business analysis, and carrying out SEO optimization of website content.

As you can see after reading this article, every language is best for specific domains and offers a definite set of opportunities for developers with regard to technical functionality and usability features.

To choose the best language for your needs, compare their characteristics and features. Many businesses are keen to have employees with multiple technical skill sets, so when deciding what language to learn next, rely both on your personal preferences and what the industry needs.

What is the most widely used programming language?

JavaScript has remained the most extensively used language for the last nine years.

What are the most popular programming languages for mobile apps?

JavaScript, Flutter, Swift and Kotlin are used most often for creating mobile applications.

What are the most popular programming languages for the Internet of Things?

Java, C, JavaScript, Python, C++, Go, Swift and Ruby are the most widespread in IoT programming.