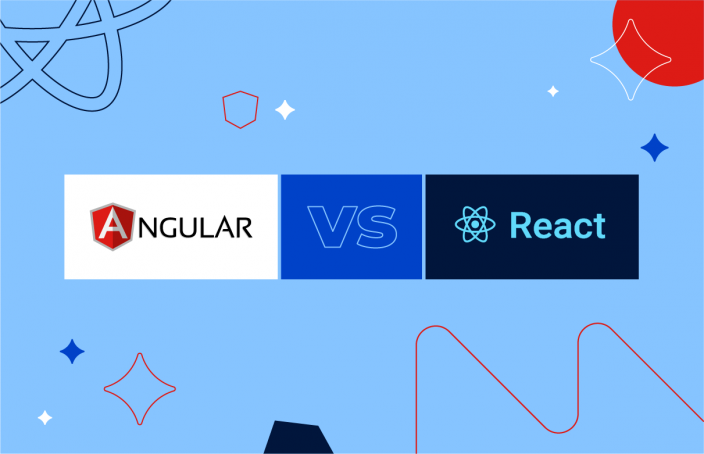 In my opinion, it makes no sense to try to compare two good tools for frontend development. Both React and…

Libraries and frameworks are irreplaceable assistants for software engineers. They take on some of the developers’ tasks, facilitating the creation of apps and websites. The leading JavaScript frameworks for frontend projects today are React.js and Angular. We’ve compiled comprehensive overviews of these two tools, with their advantages, disadvantages and peculiarities, to help you decide which one is better suited for your project demands.

The history of Angular dates back to 2010, when Google released AngularJS — an open-source framework written in JavaScript and aimed at creating single-page applications. It offered a set of components and MVC and MVVM architectures needed for building user interfaces for such apps.

In 2016, however, the Angular team totally rewrote AngularJS and released the Angular version 2.0 (or just Angular). The framework is also open-source, but its basis is TypeScript. With all the refinements, the goal of Angular is to develop dynamic and scalable web applications, which means more business opportunities for small companies and large enterprises.

Since the beginning of 2022, Google provides no support for AngularJS in terms of security or compatibility issues. At the same time, November 2021 saw the release of the Angular 13 version, and the development team promises to deliver upgrades twice a year. Therefore, Angular remains a development platform that can be taken into consideration for new projects.

Angular is a well-structured framework based on directives and components. The recent Angular versions are cross-browser compatible, i.e., they automatically load polyfill scripts, so that the JavaScript code is appropriate for each browser, including Firefox, Chrome, Safari, Edge, iOS and Android. A wide suite of libraries and tools within the framework allows developers to create enterprise-grade solutions.

React (or ReactJS) is a JavaScript library used to develop user interfaces for web and mobile applications. The initial library release occurred in 2013. In April 2022, React version 18 was born. Additionally, in 2015, the React Native framework for developing native mobile applications was created.

All the ReactJS technologies are released and supported by Meta (formerly Facebook). Since they are open-source, a worldwide community of enthusiasts contributes to their advancement. Frontend development with React.js results in fast, interactive and scalable apps compatible with all platforms.

Features of React and Angular

The two frontend frameworks, React.js and Angular (though React is a library, it is often referred to as a framework), are highly popular among developers and business owners. Let’s take a look at the features of both technologies that make them so efficient and appealing.

Components — the basic building blocks of applications. An Angular-based app is a tree of components. Angular components are TypeScript classes with decorators above them. They help you define what metadata Angular calls, including the template, styles, selectors, etc.

MVVM architecture — the Model-View-View-Model design pattern in Angular is used to divide the application into three functional parts. This separation streamlines development and ensures software maintainability because one component can easily be changed without affecting the code of another component.

Dependency injection — a composition of structural design patterns in which one object (service) is responsible for each application function. An object (service) may need to use other objects (dependencies). Dependencies are injected into the service at the time of its creation.

Angular Command Line Interface (CLI) — an official tool for initializing and working with Angular-based projects. With simple commands, it saves you the trouble of complicated configurations and build tools such as Webpack. CLI also enables end-to-end application testing.

Declarative UI — the usage of HTML instead of JavaScript to describe the interface layout, which is quicker and easier.

Virtual DOM — a virtual representation of objects from the real DOM that makes the code updates faster and memory-efficient. The essence of this virtualization is that any changes in the code are first reflected in this virtual copy, and the real DOM updates only pieces of code where modifications took place, instead of updating the entire UI project.

Components — ready-made code units with their own controls and logic. They serve as building elements of ReactJS apps and can be reused within a project, making the development highly convenient and quick. This is an especially useful feature for large-scale projects.

Declarative paradigm — you just need to describe the desired result, i.e., how parts of the application interface look in different states. React will update them in a timely manner when the data changes. Thus, you declare various components: a functional component is declared with a certain function; a class-based component is declared with a certain class. Declarative views make the code more predictable and easier to debug.

One-way data binding — the feature for synchronizing data between the app state and the view. With one-way data binding, the data flows in one direction, from parent to child components. Properties are encapsulated and are not available to other components. This feature ensures the improved control of code quality because developers can’t modify component properties directly.

JSX — a syntax extension for JavaScript similar to HTML. It allows developers to easily structure component rendering because they’re familiar with the syntax.

Advantages of React and Angular

Each tool has strengths and weaknesses that you need to consider when choosing a tech stack for your project. Let’s discuss the key benefits of React.js and Angular.

Disadvantages of Angular and React

You should also be aware of the difficulties you may face when using Angular or React.js for frontend development.

When to Choose React or Angular?

Summing up, we can say that React and Angular have both similarities and differences. For one project, React.js can be a good fit, but Angular may not meet all the requirements, and vice versa. Every project is unique in terms of technical, business and financial requirements. Therefore, you should make a choice depending on your specific needs.

We can only figure out some common situations when you may consider React or Angular.

ReactJS is a better choice if:

Angular is a better choice if:

Still, if you can’t decide by yourself which frontend development tool you need, you’d better consult a trusted software development company.

Angular and React Use Cases

Conclusion: Which Is Better?

The question is wrong. There is no way we can say that Angular is better than React.js or vice versa. These are two popular and reliable frontend development tools that are good in different situations. Hence, the choice should always be based on the needs of a specific project.

Which is faster, React or Angular?

Both ReactJS and Angular are fairly fast tools. It’s possible to say that React is a bit faster than Angular due to its usage of the virtual DOM.

Is Angular dying because of React?

As per Statista, 23% of developers were using Angular in 2021, while 40% of respondents reported to be using React.js. This means that React outcompetes Angular by some parameters. However, it’s not true that Angular is dying. This framework is still in high demand.

What is the best Angular and React development company?

SaM Solutions is a trusted software development company with 28+ years of experience and hundreds of successfully implemented projects. Our frontend developers have created both Angular- and React-based solutions, so you are in safe hands.