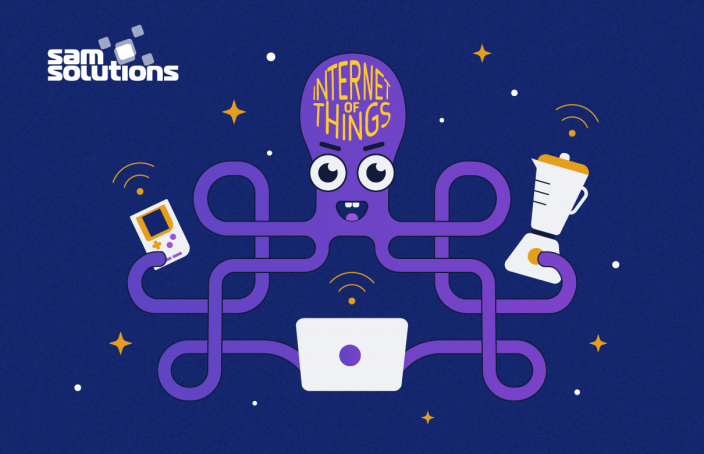 Great work thanks to you for sharing such useful information. keep it up all the best. It's one of the…

A huge ecosystem of connected devices, named the Internet of Things, has been expanding over the globe for the last two decades. The IoT system can function and transfer information in the online mode only when devices are safely connected to a communication network. What makes such a connection possible? The invisible language allowing physical objects to “talk” to each other — IoT standards and protocols. This article explains complicated abbreviations and helps you make sense of the Internet of Things standards and protocols.

Now, the overwhelming number of objects around us are enabled to collect, process and send data to other objects, applications or servers. They span numerous industries and use cases, including manufacturing, medicine, automotive, security systems, transportation and more.

The first devices connected to the global net appeared in 1982. It was a Coca-Cola vending machine that could control the temperature of the machine and keep track of the number of bottles in it. The term “Internet of Things” is considered to be formulated in 1999 by Kevin Ashton, an RFID technology researcher.

In the 1990s, all IoT-related activities came down to theoretical concepts, discussions and individual ideas. The 2000s and 2010s was a period of rapid development when IoT projects began to succeed and found certain practical applications. Multiple small and large projects were created, from intelligent lamps and fitness trackers to self-driving cars and smart cities. This was made possible because of the emergence of wireless connections that could transfer information over a long distance and the increased bandwidth of Internet communications.

The IoT grew to a completely “different Internet,” so that not all existing protocols were able to satisfy its needs and provide seamless connectivity. That’s why it became a vital necessity to create specialized IoT communication protocols and standards. However, some existing technologies (e.g. HTTP) are also used by the Internet of Things.

An IoT system has a three-level architecture: devices, gateways and data systems. The data moves between these levels via four types of transmission channels. 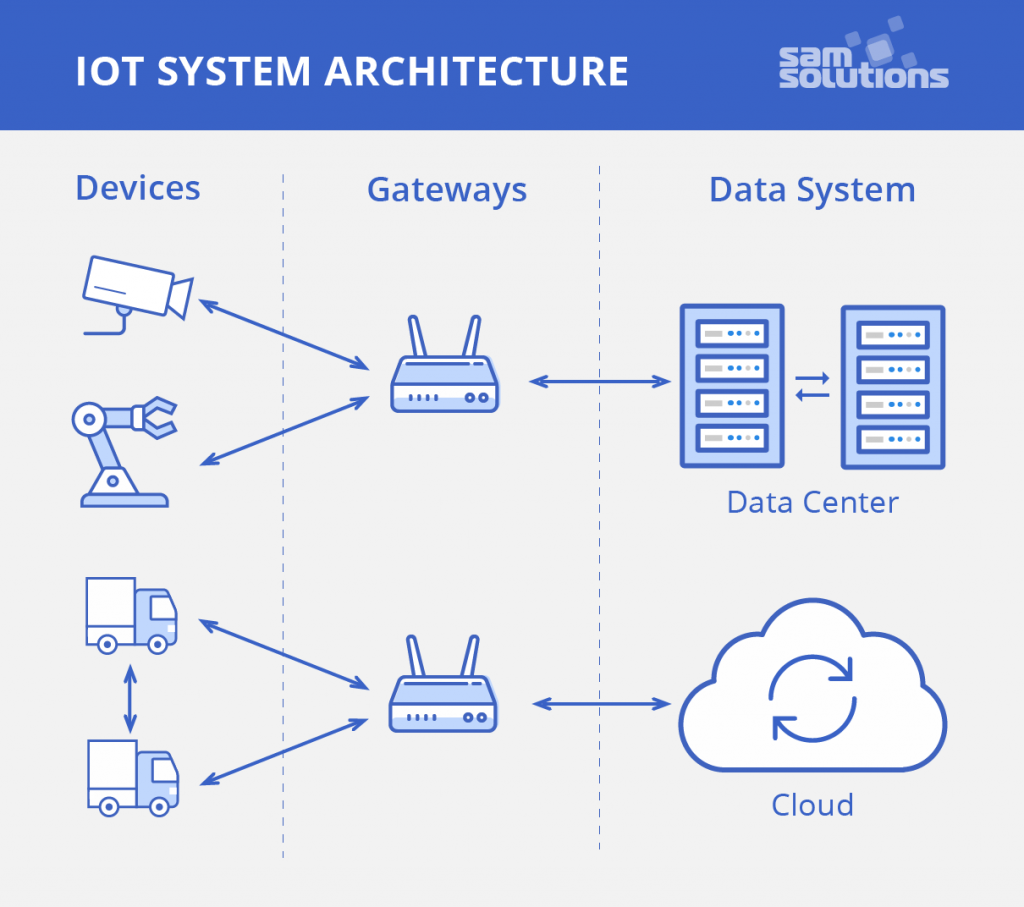 Networks are divided into categories based on the distance range they provide.

A nanonetwork — a set of small devices (sized a few micrometers at most) that perform very simple tasks such as sensing, computing, storing, and actuation. Such systems are applied in biometrical, military and other nanotechnologies.

NFC (Near-Field Communication) — a low-speed network to connect electronic devices at a distance within 4 cm from each other. Possible applications are contactless payment systems, identity documents and keycards.

BAN (Body Area Network) — a network to connect wearable computing devices that can be worn either fixed on the body, or near the body in different positions, or embedded inside the body (implants).

PAN (Personal Area Network) — a net to link up devices within a radius of roughly one or a couple of rooms.

LAN (Local Area Network) — a network covering the area of one building.

WAN (Wide Area Network) — a network that exists over a large-scale geographical area and unites different smaller networks, including LANs and MANs.

Wireless nets can also be categorized according to their topology, i.e. a connectivity configuration. There may be various combinations of connections between nodes: line, ring, star, mesh, fully connected, tree, bus.

Mesh networks have the most benefits if compared to other types of networks since they don’t have a hierarchy, and the hub and each node is connected to as many other nodes as possible. Information can be routed more directly and efficiently, which prevents communication problems. This makes mesh networks an excellent solution for the connected objects.

Most Popular Internet of Things Protocols, Standards and Communication Technologies

Now, let’s get to the specifics of IoT wireless protocols, standards and technologies. There are numerous options and alternatives, but we’ll discuss the most popular ones.

MQTT (Message Queue Telemetry Transport) is a lightweight protocol for sending simple data flows from sensors to applications and middleware.

The protocol functions on top of TCP/IP and includes three components: subscriber, publisher and broker. The publisher collects data and sends it to subscribers. The broker tests publishers and subscribers, checking their authorization and ensuring security.

DDS (Data Distribution Service) is an IoT standard for real-time, scalable and high-performance machine-to-machine communication. It was developed by the Object Management Group (OMG).

You can deploy DDS both in low-footprint devices and in the cloud.

AMQP (Advanced Message Queuing Protocol) is an application layer protocol for message-oriented middleware environments. It is approved as an international standard.

The processing chain of the protocol includes three components that follow certain rules.

Bluetooth is a short-range communications technology integrated into most smartphones and mobile devices, which is a major advantage for personal products, particularly wearables.

Bluetooth is well-known to mobile users. But not long ago, the new significant protocol for IoT apps appeared — Bluetooth Low-Energy (BLE), or Bluetooth Smart. This technology is a real foundation for the IoT, as it is scalable and flexible to all market innovations. Moreover, it is designed to reduce power consumption.

The Zigbee Alliance even created the universal language for the Internet of Things — Dotdot — which makes it possible for smart objects to work securely on any network and seamlessly understand each other.

Wi-Fi is the technology for radio wireless networking of devices. It offers fast data transfer and is able to process large amounts of data.

This is the most popular type of connectivity in LAN environments.

Cellular technology is the basis of mobile phone networks. But it is also suitable for the IoT apps that need functioning over longer distances. They can take advantage of cellular communication capabilities such as GSM, 3G, 4G (and 5G soon).

The technology is able to transfer high quantities of data, but the power consumption and the expenses are high too. Thus, it can be a perfect solution for projects that send small amounts of information.

The Internet of Things has become the basis of digital transformation and automation, developing new business offerings and improving the way we live, work and entertain ourselves.

Choosing the appropriate type of connectivity is an inevitable part of any IoT project. This article gives you a general idea of how to link your smart thing to the net. If you want to make a precise IoT protocols comparison or need professional help in other IT services, request consultation with a SaM Solutions’ specialist. For 28 years, we have been providing IT consulting and custom software engineering services to our clients, and have versatile experience in different areas.