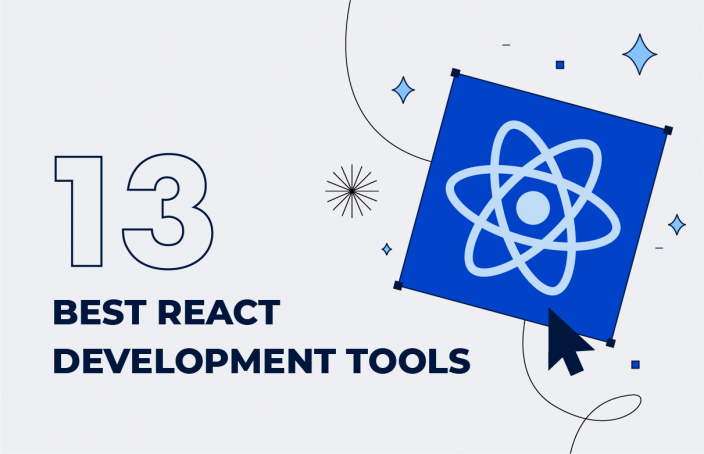 Your blog contains much useful information, and this article is not an exception. Much gratitude to the author from the…

New tools for frontend development appear literally every day. Hence, it’s mission impossible for software engineers to be aware of all of them, let alone master all of them for use at work. Nevertheless, developers should continuously upgrade their skills by learning about the best tools available for the frontend, because everything changes so quickly in this particular area.

This article is for React developers who want to know how to save time and write cleaner code with the best React development tools.

Firstly, a couple of words about React. This JavaScript library is currently among the top open-source tools for frontend projects. It is based on components that can be used multiple times within a project, which significantly enhances your productivity. It’s important to distinguish React.js and React Native: the former is a library for building web applications; the latter is a framework for creating mobile applications.

Now, let’s look at the most popular libraries, testing tools and extensions that can make your React development as easy as possible, with ready-made ways for solving various issues. We’ve compiled a list of 13 tools.

The first candidate you should consider to include in the tech stack of your React project is React Developer Tools. Many frontend specialists love this extension as it provides convenient debugging. With React DevTools, you can thoroughly inspect your application. Precisely, you can:

To get started with React DevTools, install it as an extension for Firefox, Chrome or Microsoft Edge.

Create React App is a convenient environment for starting the creation of new single-page apps in React. Using this environment, developers can take advantage of the latest JavaScript features, optimize the application for production and enjoy a comfortable experience during development.

Create React App doesn’t handle any backend logic or databases. It only provides commands to build the frontend, so you can use it with any backend. Tools like Babel and webpack are preconfigured and do their job, so you don’t need to know anything about them and can focus on coding.

To get started with Create React App, you will need Node.js 14.0.0 or later and npm 5.6 or later on your machine. It works on macOS, Windows and Linux.

Another popular React tool worthy of your attention is Storybook. This is an interactive environment for developing and testing UI components. Storybook allows you to view the component library and different states of components.

The core feature of Storybook is that it runs separately from your app. This means the creation of new components doesn’t depend on the main project. The UI editor and a sandbox allow you to develop and tweak components in isolation, simulate various use cases and automate testing. This way, you improve the development speed, and ensure component reusability and testability.

One more benefit is the compatibility of Storybook not only with React but with other frontend frameworks — Angular, Vue.js, Svelte, etc., as well as with other testing tools such as Jest and Enzyme. This makes it useful for a wide variety of projects.

This dedicated IDE for web application development in React provides great features that help you optimize the development process.

Reactide is a cross-platform tool with simple navigation, visual editing, and a range of GUI controls of component styles and properties.

It’s essential for any project to have a set of testing tools. React Testing Library is a small but useful library allowing you to test your React code without too much hassle. The library adds functionality to the DOM Testing Library, on top of which it’s built.

Excellent documentation with some good examples will get you up and running quickly.

React Sight is a popular lightweight visualization tool widely used for debugging large and complex projects. Using this tool, you can represent your application as a hierarchical tree of components, e.g., as a flowchart. Filters in the interface allow you to focus on those components you mostly need to interact with.

React Sight is released under the MIT license, and you can access its source code in the GitHub repository. You can install it as a Chrome extension.

Bit is an online collaboration platform for sharing React components. First, this command line utility allows teams to work together on individual components. In addition, it makes it possible to check component dependencies, testing them separately from the main project.

Secondly, this is a great helper for those who create modular applications and don’t want to waste time on writing everything from scratch. Thousands of developers have already uploaded their React-based apps and components on Bit. You just need to search for those that fit your project better and download them.

Cypress is a JavaScript framework for writing end-to-end tests in frontend projects (React, Angular, etc.). A great advantage of Cypress is its documentation: it’s written in plain English, contains the API description and has tons of useful guides. A great development experience is guaranteed.

React Proto is an application prototyping tool that enables the collaboration of developers and designers. In the visual interface, they can plan the project structure, create components and change their properties when needed. For example, you can drag and drop elements instead of writing code to do this.

The why-did-you-render library sends notifications about repeated renders in your React code and determines the reasons why they occurred. With its help, developers can avoid re-renders and, consequently, improve app performance.

CodeSandbox is an amazing online code editor that allows developers to quickly create applications using modern programming languages and technologies such as React, Angular and Vue.js.

CodeSandbox has a live mode that allows for real-time collaboration. React developers can create, delete, edit, code, and move files simultaneously. This application also allows you to see what files your colleagues are working on. By switching to live mode, you receive a URL that you can share with colleagues who need to join the session. Other people can only make changes while they are in the session.

This development environment offers a variety of features and code templates that will definitely make your coding with React faster and easier.

MUI follows the Material Design concept by Google that aims to make minimalistic and neat applications. This library is a well-documented collection of components such as buttons, dropdown menus, toolbars, and so on. It also provides advanced layouts and intuitive customization for more complex use cases.

MUI is a great opportunity to combine a trendy and modern user interface with React capabilities in one project.

Many developers use Bootstrap, a popular CSS framework, to create mobile-friendly websites with professional designs. The problem is that Bootstrap components are not integrated with React.

React Bootstrap is the open-source package that provides components modified specifically for React developers. So, you can make use of all the Bootstrap opportunities in your React projects.

The above-listed tools are designed to solve various issues while developing React projects. Some of them help you with coding and visualizing, and others with testing and debugging. Of course, the list is infinite, and there are many more tools that can complement each other and add up to a React stack that perfectly matches your requirements.

One thing is certain: the right tools speed up the development and improve the code quality. What are your favorite React tools? Please share your thoughts in comments below.