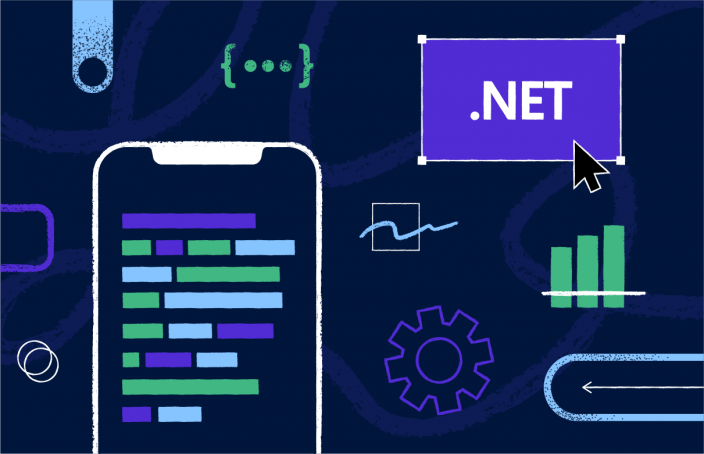 Thank you for such valuable information and practical examples. It’s essential to get insights on software development from experienced specialists.…

Microsoft’s flagship product .NET is a programming platform that gives users opportunities to undertake a wide range of tasks, from the creation of simple console applications to the end-to-end development of highly scalable web, desktop, mobile apps, IoT solutions, and more.

In this article, we’ll discuss in detail the tools and methods .NET provides for developing mobile applications. Let’s take a look.

First let’s get a general idea of what .NET is. The traditional definition goes something like this: “.NET is an open-source and free framework by Microsoft used to develop various types of applications for various platforms and being an integral part of Windows OS.” 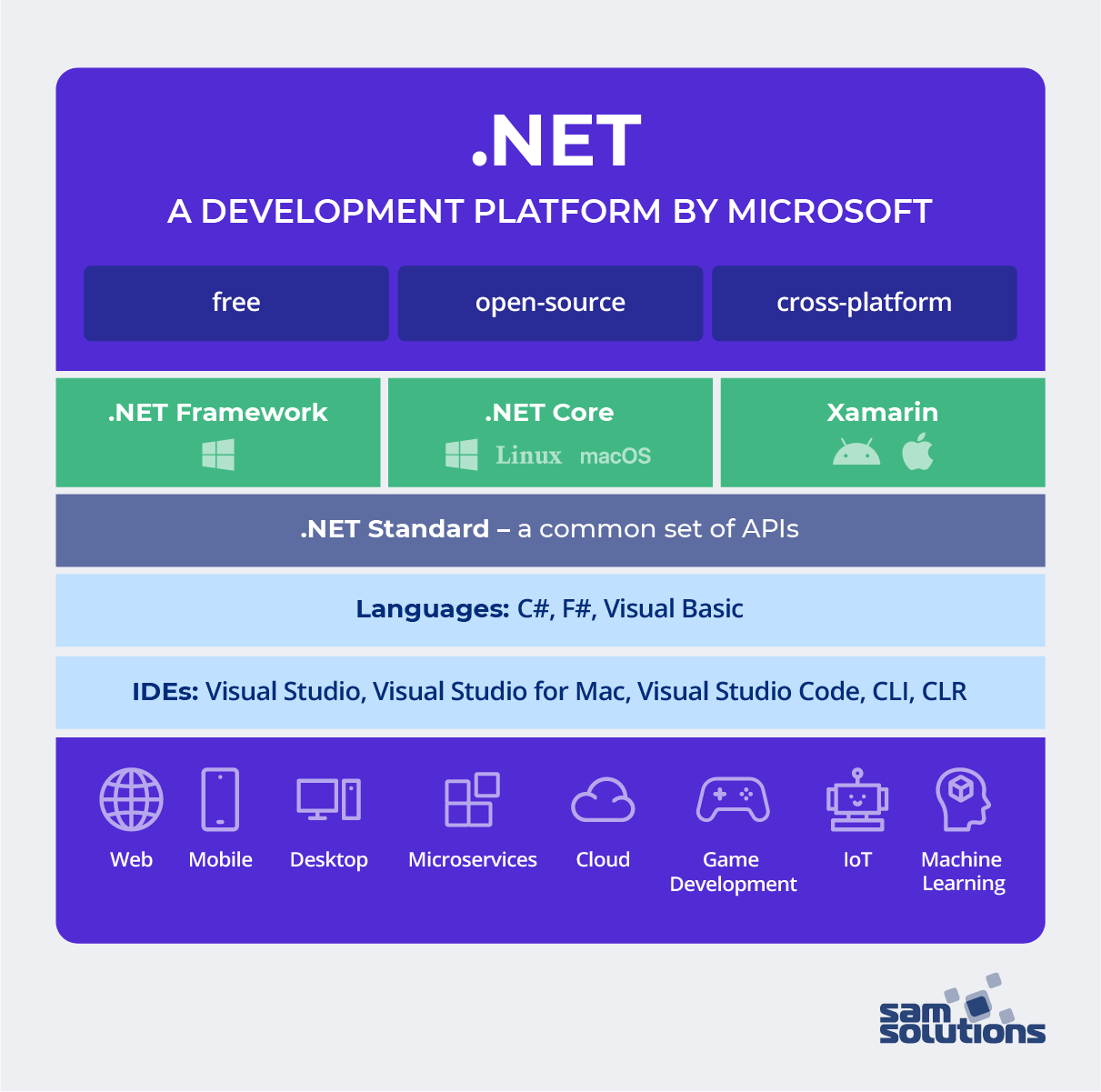 The following are the key components.

Note! If there were still separate products in .NET 5 (.NET Framework, .NET Core), they have now merged under one name — .NET 6. So, you can launch this single version and create any types of solutions. All the previous products now have common libraries, APIs and infrastructure components. 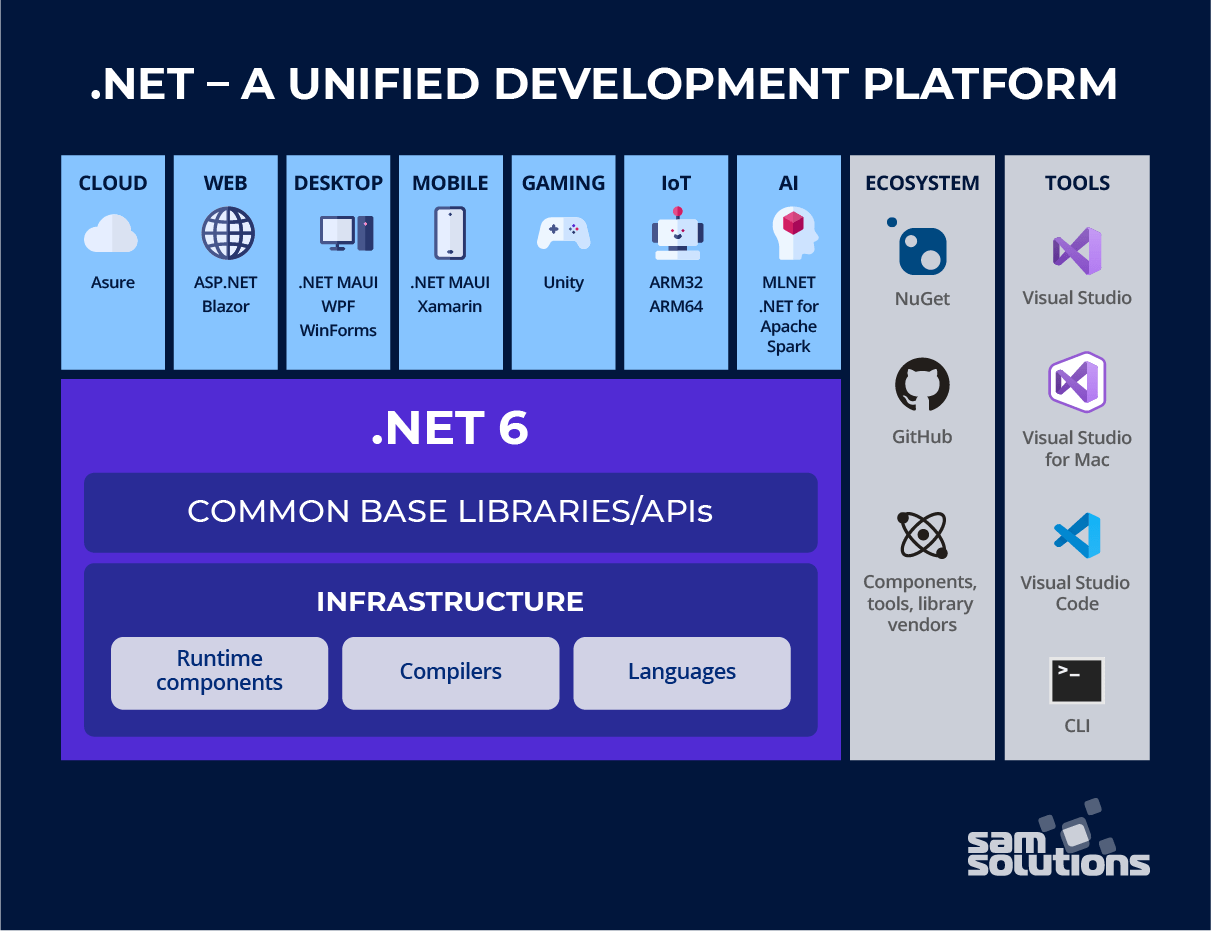 As you can see, the .NET ecosystem is highly diverse, given that we’ve mentioned only some major components. The list can be complemented by numerous libraries, runtimes and other tools.

What Is the Use of the .NET Framework?

According to Statista, .NET Framework was the most used framework among developers worldwide in 2021, with .NET Core/.NET 5 in the top three as well. This fact proves that the platform has a broad scope of application, including:

The following hints suggest when the various .NET products should be used.

The frontend of mobile applications is the part that users see and interact with. Frontend developers and web designers work together to implement the logic and its visual representation. In .NET, there are several tools for frontend development.

Xamarin is the most popular open-source frontend framework in the .NET family. It enables cross-platform development — i.e., the project has several target platforms at once (Android, iOS). With Xamarin, you can create mobile applications in two different ways.

First development option — a separate UI for each platform

Using Xamarin Native, you can develop Android and iOS apps independently. This means that you will have to write unique code for each solution with the help of native features (XML files, storyboards) provided by Xamarin.iOS and Xamarin.Android libraries. At the same time, the backend of such solutions can be shared.

As an example, I want to show you the Android layout file for one of our company’s internal applications:

And this is the resulting screen: 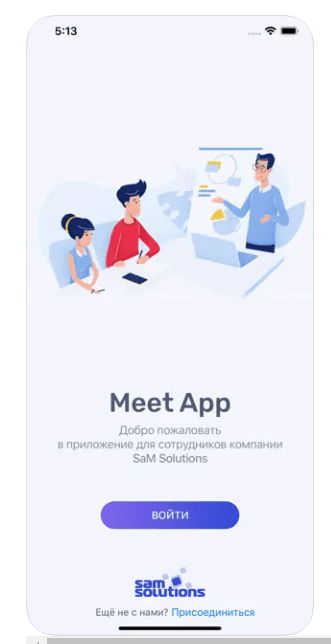 The main advantage of this approach is that, though coding for different platforms, you use one language, C# (instead of Swift, Java, and others). You can also incorporate third-party SDKs specific for both platforms due to bindings that Xamarin provides. This is very convenient as you get everything in one place.

Second development option — a single UI for all platforms

Using Xamarin.Forms, you can write a sharable UI code for all platforms. Of course, you will need some minor code adjustments for each target platform, but this is much quicker than having to develop separate solutions.

Take a look at this example of a UI layout based on Xamarin.Forms:

The output of this code is exactly the same screen as in the screenshot above.

Moreover, Xamarin supports other platforms such as Windows, Mac, Linux (GTK) and Tizen, so you can develop an application that will run on a wider range of mobile devices. Thus, Xamarin is rightly considered to be a comprehensive mobile app platform that frontend developers can leverage for cross-platform projects.

The two other options for mobile frontend development in .NET are Unity and MonoGame. While Xamarin is used for general-purpose mobile solutions, these frameworks focus on the development of mobile gaming applications for iOS and Android (but they also support other platforms).

MonoGame is a free framework used to create games for mobile devices, consoles and desktop computers. This is the successor to the Microsoft XNA framework that was used to develop games for Windows a decade ago. The code in MonoGame is written in C# and targets the iOS and Android mobile platforms, as well as other platforms that run games, including Windows, macOS, Linux, PS4, PS Vita, Xbox One and Nintendo Switch.

MonoGame is a less powerful tool than Unity. However, it provides a range of features that enable 2D and 3D rendering, the management of sounds, and images and states in the game.

Unity is a fully featured platform offering real-time 3D experiences not only for game development but also for creating films, automotive solutions, architectural projects and more. With built-in VR/AR capabilities, Unity can be a great tool for any application that requires realistic visualization.

Unity provides a simple-to-use editor where you create objects and then implement their logic with the help of .NET technologies.

Here’s an example of the Unity script:


Platforms supported by Unity include:

As you can see, gaming engines like Unity provide advanced capabilities for mobile development, which is highly valued by modern users. However, when considering the tool for frontend mobile development, keep in mind all the technical requirements. Frameworks like Unity with VR/AR/3D capabilities can cause certain difficulties to mobile solutions because mobile devices have limited resources (battery life, processing power, etc.) and  might not be able to perform tasks as quickly as required. At the same time, script writing based on Xamarin is lightweight.

How to Build and Run Mobile Applications?

The process of building and running mobile apps differs from that for desktop or web apps, because with mobile, you focus on a wide range of devices instead of a general-purpose PC. Hence, you can’t use a “traditional” computer; you need either a physical mobile device or an emulator that imitates the performance of such devices.

With applications for Android, it’s simple: you can work on a computer with any operating system, use Visual Studio to select either a virtual device (emulator) or a connected physical device, and run your application.

With iOS solutions, you can work only on a computer running macOS. The good news is that Xamarin provides the Remoted iOS Simulator for Windows, so you can test your iOS apps in their target simulator and display it on your Windows machine.

The backend part of a mobile solution “lives” at the server side and out of the user’s sight. Of course, there are simple mobile applications such as a calculator or voice recorder that don’t need a backend, since they don’t have to store and process data. But to create large solutions with complicated business logic, the backend development team has to work hard in order to make the magic happen under the hood.

It should be noted that backend development for mobile applications is the same as for web apps. Thus, if you need to develop several mobile and web solutions with the same functionality, you can share the backend service, which is super convenient and time- and cost-efficient.

To develop the web service infrastructure for your mobile application, you need to create a REST API serving as a mediator between the mobile frontend and backend. For this purpose, you can use ASP.NET Core, selecting a web API project template in the .NET Core infrastructure. Then, you’ll need to add a database context, apply CRUD methods, configure URL paths, routing, return values, etc.

In case you need to go beyond the backend development process and integrate it with the system administration, virtualization, security management, continuous integration/continuous deployment (CI/CD) and other practices, you should focus on the DevOps tools.

As a result, you can build your application, monitor its performance and stability, and address reported errors from a single cloud-based platform.

One more option for building and hosting the backend for .NET-based mobile solutions is Azure Mobile Apps. The technology offers a range of capabilities for cross-platform and native applications:

If you compare Visual Studio App Center and Azure Mobile Apps, both tools are popular among .NET developers. However, the former has a wider range of DevOps services and is more actively developed at the moment. Hence, the choice of the most appropriate tool should be based on the project goals, tech needs and financial capabilities.

Why Consider .NET as an Excellent Option?

.NET has been on the market for so long that it has become a recognized brand. Today, there is an extended ecosystem of software products, libraries and tools that are written specifically for the .NET Framework. This provides incredible flexibility in terms of solutions you can develop with .NET.

We’ve compiled a list of the best reasons why you should consider .NET for mobile development.

As you can see, over the years of its existence, .NET has become the most profitable development environment for a wide range of platforms, including Android, Linux, macOS and iOS.

SaM Solutions is a certified Microsoft partner with the following competencies:

Our team of experienced and motivated .NET developers have successfully implemented numerous projects and earned the praise of many satisfied customers over the years. We will gladly transform your ideas into efficient mobile (or other) solutions, so don’t hesitate to contact us.

Andrei is a Xamarin developer at SaM Solutions. A certified specialist, Andrei relies on his knowledge and experience to create efficient and user-friendly mobile applications that meet the requirements of both businesses and their clients.