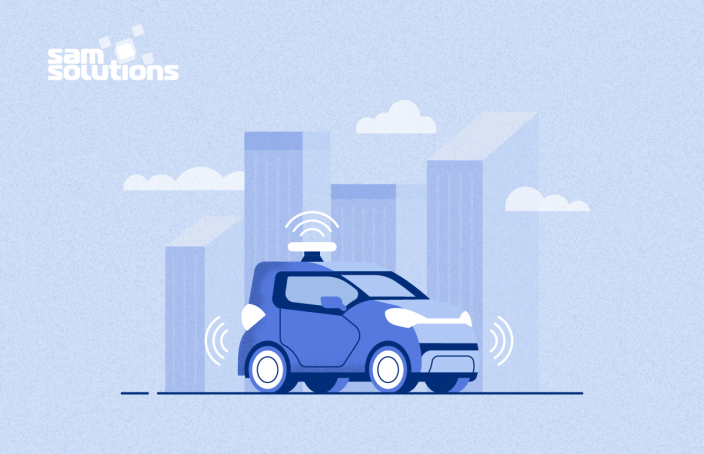 Great writing style in this. Easy to understand.

The driverless car market is just starting to emerge, but experts predict its rapid growth in the coming years. Let’s explore how the Internet of Things (IoT) is changing the automotive industry.

A number of the leading global automakers such as BMW, Audi, Volkswagen, General Motors and Toyota, together with IT-giants Google and Apple, place serious emphasis on autonomous driving and IoT technology. They are actively engaged in the development of automotive IoT solutions to assist drivers and, as the ultimate goal, to create a Level 5 (see below) self-driving car.

Their collaboration has already had some impressive results. Audi AG, for example, claimed that the usage of the brake assist system in their vehicles in the last five years reduced the total number of passenger injuries by 38 percent.

The track record of integrating vehicles and digital technology is really long and rich and may be considered to start in 1911, when automakers began installing the first piece of electronics in automobiles — electric starters.

In 1985, drivers saw in their cars the ancestor of infotainment systems — a compact disc player. Dashboard computer diagnostics appeared in 1994 and were followed by GPS navigation systems introduced in 1995.

A new millennium was marked by the introduction of USB and Bluetooth connectivity available for automobiles. Thus, in the 2000s, car producers got very close to the creation of IoT cars.

A research service BI Intelligence predicted more than 94 million connected cars to be produced in 2021, which would represent a compound annual growth rate of 35 percent from 21 million smart vehicles shipped in 2016. 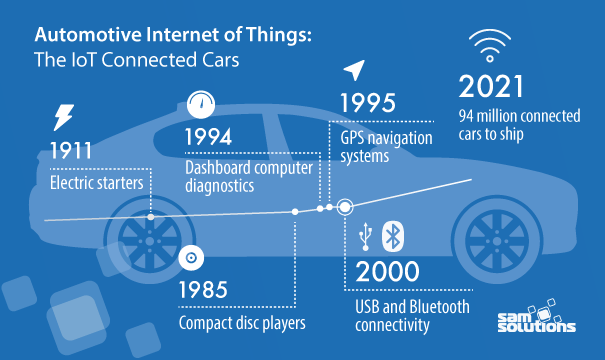 The IoT technology can empower connected devices to perform some actions independently; that is, without human interference. To create a connected car, the Internet of Things introduces various features and smart options for a vehicle. The hierarchy of driving automation was outlined on the basis of the progression of these features.

Currently, all vehicles that have some autonomous components fall under Level 1 and Level 2 and focus on assisting drivers. The highest level of car autonomy that has been reached by now is Level 3 with the only representative — Audi A8 — announced in July 2017.

Remember, no self-driving car that falls into categories of high or full automation currently exists! Drivers are still responsible for their behavior on the road.

The software and algorithms for autonomous cars must be extremely powerful in order to process the info from the extended network of sensors and make the right decisions. Vehicles should literally learn communication skills to be able to see, hear and interpret any situation on the road. Moreover, the system should be able to predict the behavior of people both in and out of the car and correct it for the sake of safety.

High-quality mapping is a good supplement to the above-mentioned devices and can greatly improve the autonomous driving experience. The modern mapping industry might boom in the near future.

It’s hard to say definitively how IoT applications in the automotive industry will affect humanity. Most developers tend to believe that connected cars and the IoT will revolutionize the existing transportation system. But will the changes be more negative or positive? Take a look at the possible pros and cons of implementing IoT in automotive manufacturing.

Despite the fact that autonomous vehicles are not yet available, many companies in different countries are actively testing them in real conditions.

In 2016, Dubai authorities launched the self-driving bus and tested it along the city streets for a route of about 700 meters.

An autonomous taxi service also appeared in Dubai. It started with 50 Tesla cars, each equipped with Tesla’s latest Autopilot software. Actually, Dubai authorities plan to automate 25% of the city’s transport by 2030.

In March 2018, in Japan, Nissan Motor and a mobile games producer DeNa started testing the self-driving taxi service EasyRide they developed together.

Passengers use an application to call for a taxi that delivers them to predetermined destinations in the city. An in-car tablet screen provides information about local sightseeing areas. After the ride, passengers complete a survey: they share their experience and suggest the possible price they would pay for EasyRide when it’s officially launched.

Google’s autonomous car development company Waymo has tested its cars in California, Texas, Washington, Nevada, Michigan and Arizona. In 2018, the next stop for the test program will be Atlanta, Georgia.

The Future of Transportation

IoT for the automotive industry has become a must. According to the latest forecasts of the Boston Consulting Group (BCG), the total volume of the unmanned vehicle market may be sized at about $42 billion by 2025. It is expected that the share of self-driving cars in the global sales structure will reach 12-13 percent. In other words, about 14 million autonomous cars will be launched on the market.

McKinsey Global Institute is even more optimistic in its forecasts, assuming that the total share of unmanned vehicles (both fully autonomous and semi-autonomous) will reach 15-20 percent by 2025.

By some estimates, in just a few decades, IoT in car manufacturing will allow mankind to save about $1 trillion in total and provide a 70 percent reduction in the number of fatal accidents. Even now, automation significantly reduces the accident rate.

Many experts rightly believe that the biggest problem preventing driverless technology from developing is the imperfection of the legislative framework, rather than the lack of new technologies and solutions. However, there is progress in this direction. The US Department of Transportation issued its first recommendations regarding autonomous vehicles. AT Kearney consulting company predicts that the legal framework for unmanned vehicles will be fully developed by 2025.

However, it should be noted that people themselves are not ready for the active expansion of self-driving transportation yet. People must get used to the fact that their vehicles will be controlled by an automated system. That’s why transportation is going to experience gradual shifts.

SaM Solutions has significant experience in IoT and embedded development. Our specialists are able to provide: