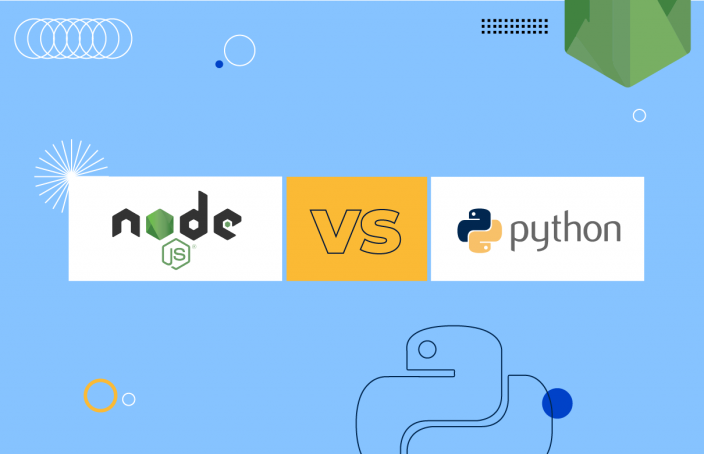 I like your articles on the comparison of various technologies, and this one is also very helpful. Keep on writing…

We continue our series of articles on popular programming languages, technologies, and tools currently used by software developers. The goal of this article is to compare Node.js and Python, the most widely used tools for the backend development of web applications. We will analyze the prominent features of both Python and NodeJS, look at the challenges of working with both tools, and compile a comparison table to better understand the differences and similarities between them.

The inventor of Node.js is Ryan Dahl, who in 2009 implemented the idea of simultaneous processing of multiple requests in this tool. In essence, Node.js is a JavaScript runtime written on V8 Engine by Google and widely used for backend development.

Today, NodeJS is the largest free and open-source runtime environment aiming at various platforms, used to create a wide range of server-side solutions, including IoT, social media and real-time apps.

The development of Python began in the second half of the 1980s, and it was officially announced in 1991 by Dutch programmer Guido van Rossum.

Python’s syntax is incredibly lightweight, which allows you to learn how to use it in a relatively short time. The kernel of Python has a very convenient structure, and a wide range of built-in libraries allows you to use an impressive set of useful functions and features. Python is used to write various types of applications, as well as develop web services.

The following is a list of features that most clearly characterize NodeJS. 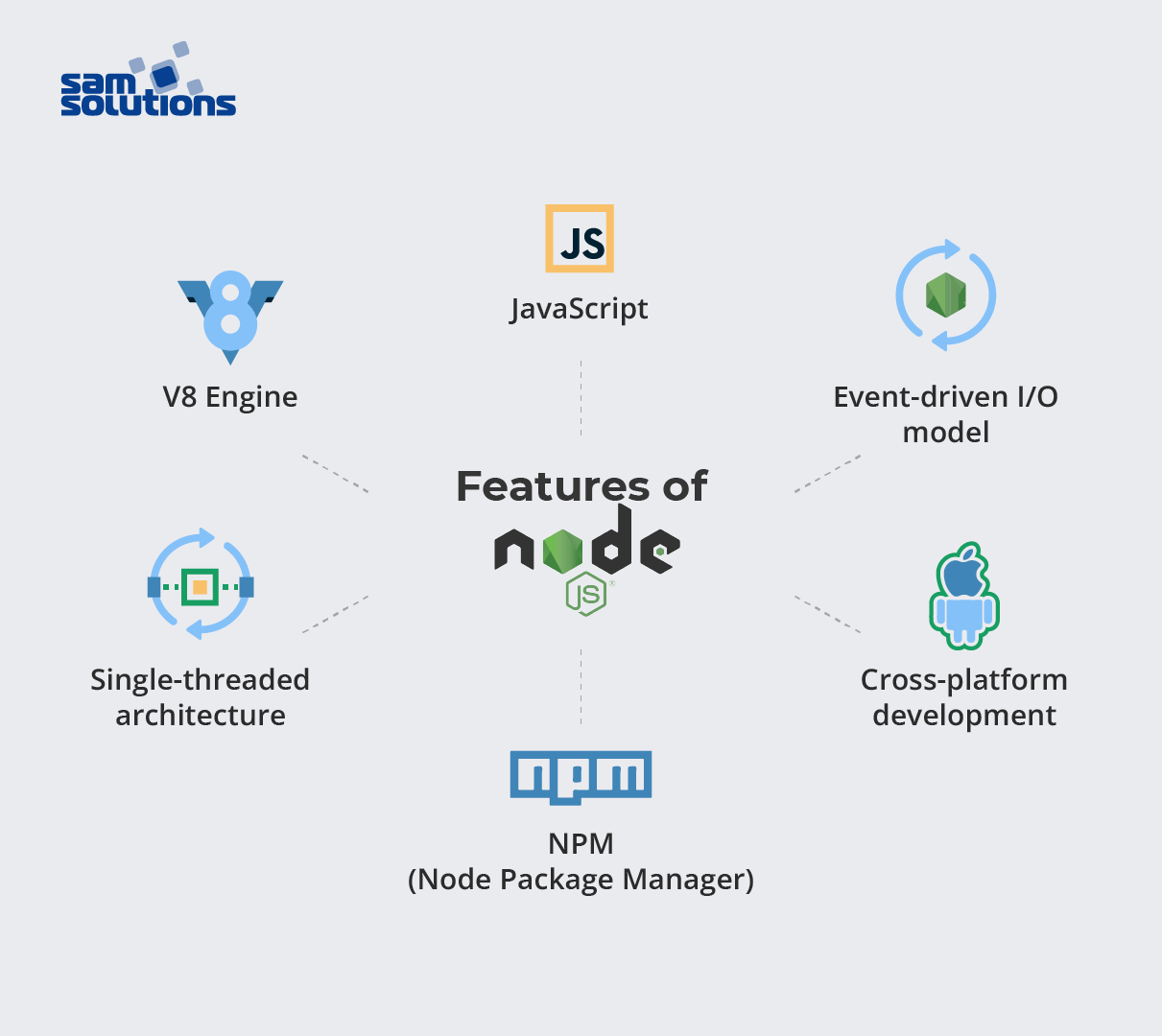 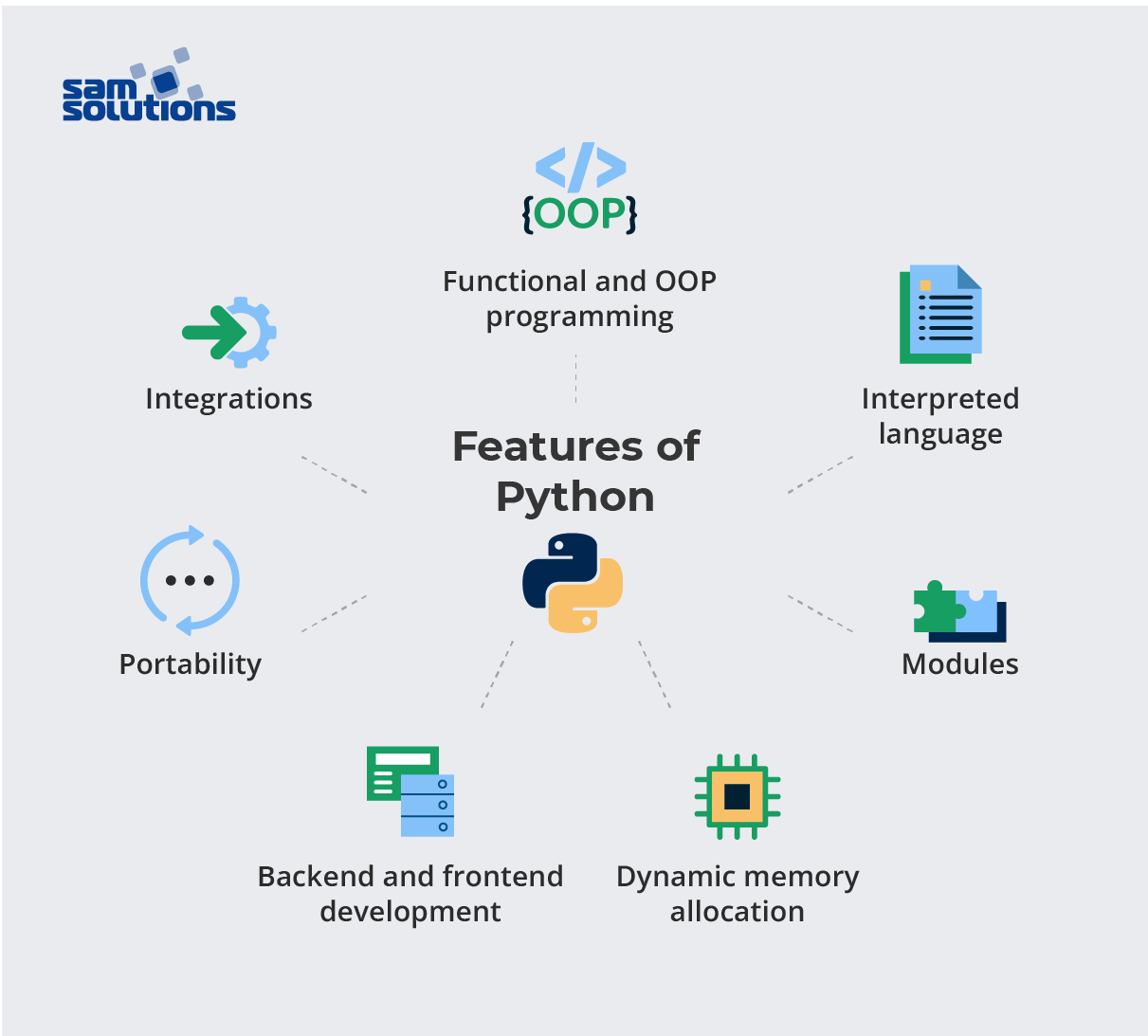 Note! Frontend development with Python is not a popular approach, since it has many limitations and isn’t suitable for projects with complex UI.

Despite all the benefits and powerful features that Node.js provides, it also presents certain issues during the development process.

Working with Python can also present some pain points.

Differences between Node.js and Python

Now let’s compare Node.js and Python point by point, covering the main aspects of the two technologies, and discover their differences and similarities.

The Node.js vs Python comparative table

Evidently, the key difference between Node.js and Python is that Node.js is a runtime environment, while Python is a programming language.

The NodeJS architecture is based on a single-threaded event loop model, which means it can handle multiple asynchronous events and the thread is not blocked.

Using both Python and Node.js, you can build various types of architecture patterns, including event-driven architecture and clean/hexagonal architecture, but you can’t do that by default. The difference is that you will have to install additional libraries and tools (e.g., asyncio), if you wish to develop asynchronous code in Python.

The performance of Python-based programs is slower because the language is interpreted and requests are processed in a single flow.

Node.js has JavaScript syntax, which is quite easy to grasp. However, since NodeJS is an open-source platform, its ecosystem comprises a bunch of various functions and modules, and not all of them are perfect. To master NodeJS, developers should be experienced in JavaScript and have a good command of a high-level language (such as C++ or Java).

In contrast, Python’s syntax is extremely simple, clear and concise. You write fewer lines of code without curly brackets than you would with JavaScript on the Node.js platform. So, Python wins against NodeJS in terms of syntax simplicity and readability.

Node.js is a good choice for scalable projects. Using this platform, you can build apps based on microservices; consequently, you can add new functionality seamlessly, without compromising the entire app performance.

In terms of scalability, Python loses to NodeJS because it doesn’t support multithreading. If you scale up a project based on Python, it will eventually become too complex to be maintained properly.

There are no issues with Node.js customization and extensibility. You can integrate it with tools for testing, data migration, project monitoring, process management, as well as third-party frameworks such as Restify and Express. There is also a wide choice of libraries for Node.js that can add value to the functionality of an app.

Python is an integrated language, so it can cooperate with other languages (C++, Java) as well as code editors, libraries and frameworks. Among the most popular Python libraries are TensorFlow, PyTorch and Pandas. The given integration opportunities provide access to a variety of functionalities that business owners may want to add to their applications in order to deliver improved experience to customers. In particular, they help with data analysis and other machine learning tasks.

Both NodeJS and Python have an active community comprising millions of developers and contributors. Given that JavaScript is the most popular programming language and Node.js is based on JavaScript, it has a fast-growing community.

In general, both NodeJS and Python have a low learning curve. But as they say, tastes differ, and this can be a subjective opinion. How fast you learn any technology depends on individual preferences and technical background.

If you are familiar with JavaScript, you will have no trouble learning Node.js. The installation process may require some tinkering, but it’s no big deal.

If you are a newbie in the software development sphere, you may find it easier to start with Python, because its syntax is more compact and readable.

First of all, it needs to be said that Node.js and Python aim at backend development.

Secondly, Node.js and Python can both be used for desktop, web and mobile solutions, although, as we’ve mentioned before, Python is not the best choice for mobile development. In addition, both technologies can be used for cross-platform development.

If you build a solution with asynchronous processes and memory-intensive activities, you’d be better off using Node.js than Python.

Now, let’s look at specific types of applications for which each of these technologies is better suited than the other one.

Both Node.js and Python are popular development tools with their own advantages. For some projects, Node.js is more appropriate; for others, Python is a better match. In this article, we’ve described the key features of Python and NodeJS and explained what types of software solutions you can build with these technologies.

If you can’t decide on the tech stack for your project and need a detailed consultation, please contact our specialists. They have great experience working with Python and Node.js and creating backend solutions, and will help you implement your idea using the most appropriate tech stack.

Which is faster, Node.js or Python?

Node.js is faster than Python due to its use of Google’s powerful V8 engine, and because it works according to the non-blocking event-driven model that accelerates the JavaScript code execution, whereas Python interprets the code line by line.

Is Node.js easier than Python?

Node.js is easier to learn if you are already familiar with JavaScript. At the same time, Node.js has an extended ecosystem of packages and libraries, so you’ll need time to comprehend it. Python is considered the easiest language to use thanks to its concise and easy-to-read syntax.

Can you use Node.js with Python?

Yes, you can make Node.js and Python talk to each other within one solution. For example, you can connect an application based on Node.js with a Python library by using REST API, JSON data, and containerization technology.

Node.js vs. Python — which is better for the backend?

Python vs. Node.js — which is better for web development?

Undoubtedly, Node.js is the best choice for web development, while Python is more used for scientific apps and machine learning.

NodeJS vs. Python: which is most used by developers?

According to Statista, NodeJS ranks second among tools for web development, whereas Python is in the top five of most used programming languages.

NodeJS vs. Python: which is best for large-scale web applications?

It’s not recommended to use NodeJS for large-scale web apps because of its problematic scalability and complicated ecosystem. Python, with its concise code and scalability, is ideal for large projects.